We here at the Gangster-Like Social Club for Law-Abiding Human Originals (it shortens to OGC in Russian somehow, sort of like how the USSR was Russia before Russia was Russia; it’s very complicated) anyways… Here at the OGC we completed the second Plane of Deus Ex Machina expansion in second place on the server, having narrowly lost out on opening day flagging bottleneck, Nightshade.  Most guilds would give up, go home, drink a beer, sulk, and try to stick the landing on the Nightshade repop in 72 +/- 12 hours, or, you know, we can form up at our usual scheduled raid time.. whenever we see him up… it’s not a big deal. really!

We here at the <Ongoing Guilty of Cheating> guild (as our super good, and friendly, and totally not at all carrying a 6 year grudge buddies like to refer to us) weren’t going to stand for any of that nonsense.  10 hours before Nightshade’s repop window was supposed to open (by even the most generous estimations) we packed into Relic like a discount hostel at Burning Man.  All throughout the 30 hour-long ~PorthioWatch 2018~ we kept the population of friendly coalition characters in Relic above the mandatory /pickzone cap.  This meant that we could effectively lock down the open world zone, as anyone who tried to zone in would be forced into a /pick instance, where Porthio and Nightshade couldn’t spawn.

Through vigilant attentiveness and dedication to the greatest of circa ~November of 2001 nostalgia trips~ (All-Hail the Glorious Boss Mob Poopsock!) we achieved what our wildly treasured bros could only dream of – We got our coalition the nightshade flags uncontested!  Oh, and we got 12 year old content patched and a shitty bottleneck removed!  (You’re welcome Coirnav!)

Of course, we can’t take full credit for our achievements. If it weren’t for the hilariously misanthropic adventures of The-GuildThat-Shall-NotBeNamed, we never would have been able to buddy up with our coalition partners and held down a fantastically successful launch week in the first place. -Nothing brings a server together like making sure the assholes get theirs.-

We look forward to further cooperation with our friends and coalition partners going forward.  For guilds interested in joining the coalition, we stand ready to accept you and welcome you as you are – no judgements. (Not even for the snowflakes – Hi Sixirym!)

Seriously though. People. It works better when we all work together on flagging bottlenecks. Reach out if you want to just cooperate next time and save everyone the hassle.

The siren song of Level 75 content is on the wind, and our farewell tour of the Level 70 era has been all sweet, no bitter.  We’ve recently welcomed back many old friends from Citizen, Modest Man, and OGC who stepped away over the last few years, and we’re in a Strong Hands® position to move into TSS competitively. If you’re stopping by to see what’s up and say hi, consider logging and and investing in the guild of the future!

Wednesday, Friday, and Sunday night cooperative growth conferences are held weekly.  There’s open/FFA (t)raiding each weekend through Omens of War and Dragons of Norrath content for those interested in mining blocks of loot-rewarding bosses. You too, can be gearing out your 9th shitbag alt with Defense (67) and an OMM Breastplate.

Other people can apply too if they want. Cool people do that. All the wordy blablabla is over there

Under orders decoded from a white paper circulated around 2012 by the wise and mysterious Satoshi to HODL until May 23, the OGC will be performing regular Pump-and-Dump splits in Demi-Plane and Deathknell.  We can only go up! uP! UP! from here, so if you want to see your EQ experience go TO THE MOON!, apply to <Oригинал Γангстер Cоюз> today! 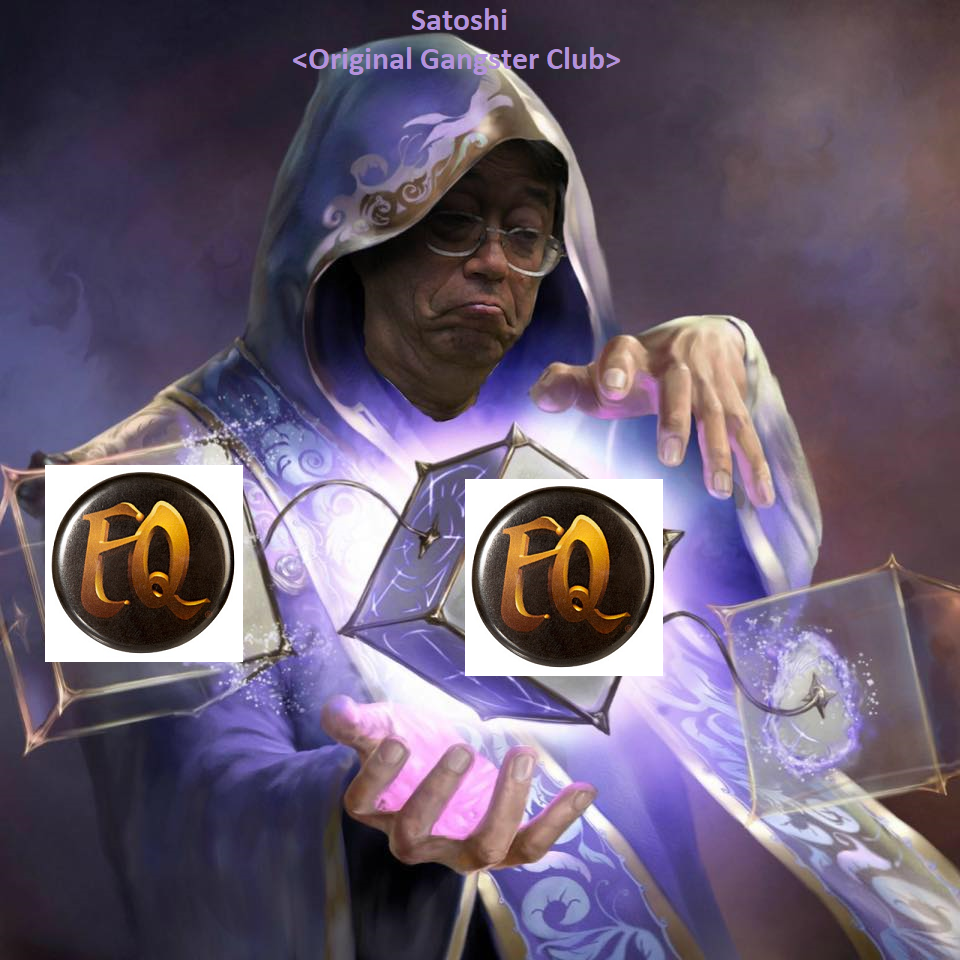